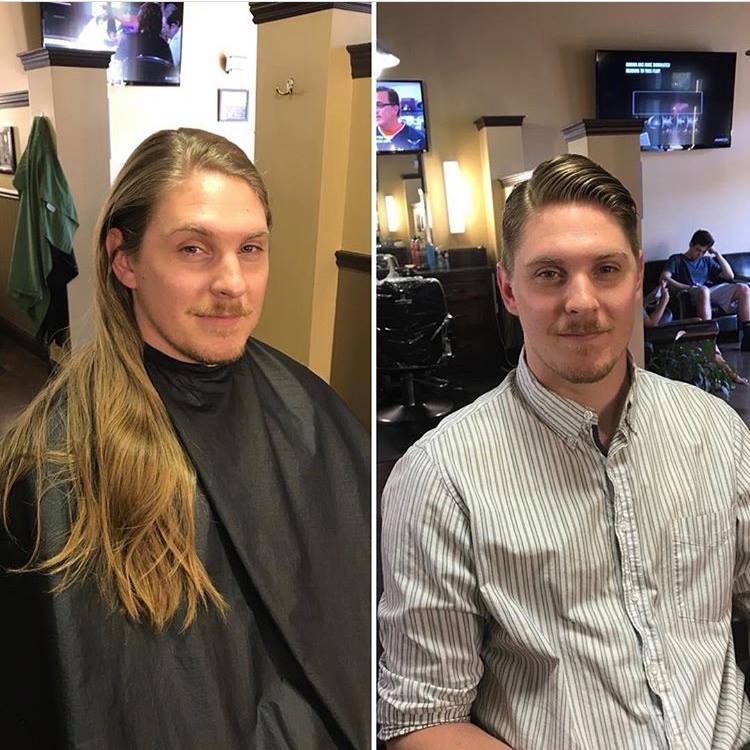 09 Aug Before and After mens haircut

Visit us on YELP

Two words that describe two very different points of the process, before and after. In this industry it’s important for the professionals who offer this type of service to understand that the before and after results will make or break their success. This profession being…a barber/hair stylist. Appearance is key in the eyes of barbers/hair stylists and if clients don’t look better than they did before, they aren’t doing their job correctly.
Welcome to the Head Game, where we promise the best before and after appearance you’ve ever experienced. Thanks for stopping by as we have so much to fill you in on. First off, as we discussed before, every client’s appearance after the haircut must be better than it was before. That’s the whole point in coming to a barber shop in the first place, right? Well, when you sit down in our chairs we will make sure you’re look is sharp and we won’t let you leave until you’re satisfied.
Let us explain our philosophy. We focus a lot on the “after” appearance not only because it’s our job, but because we know how important each cut can be for different clients. For example, it is critical for military personnel to look a certain way and have a specific haircut look. If we can’t carry out our promised haircut service, then he/she may face consequences because of our lack of customer service. Have you ever sat in an interview? Some employers will make the decision on whether or not to keep an interviewee solely based on their first impression, and a haircut is a huge part of that.
Above are just a few examples of why the Head Game prioritizes each and every one of our customers. Know that you’re not just a number, you’re our first priority. This may seem like it’s overkill, but our philosophy and importance on great customer service has gotten our business growing. More importantly it’s given our customers a great experience and “after” appearance that they deserve.
Come on in to receive the best men’s haircut in town. You’ll look the greatest you ever have, and your “after” appearance is promised to be the best.

Sorry, the comment form is closed at this time.